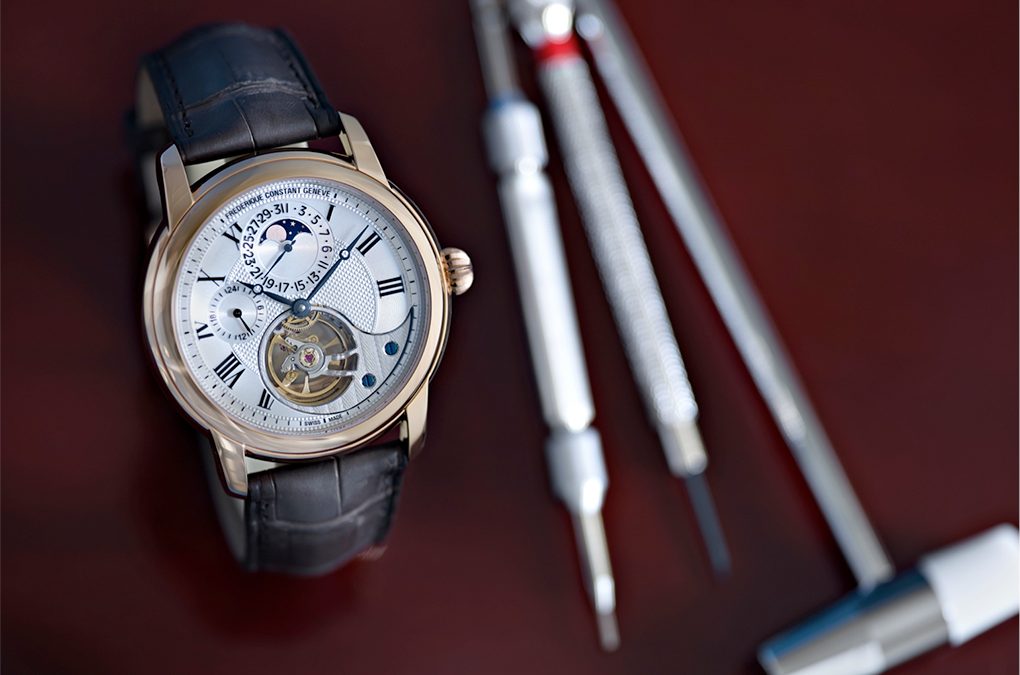 Following the success of the launch of the first Heart Beat Manufacture Calibre in 2004, Frederique Constant has presented every year an additional version to its Heart Beat Manufacture range. Some features remained constant, such as the signature aperture, perfectly centred at the 6 o’clock position. Each year, however, new design features have been added; the Heart Beat is constantly being revised, updated and technically advanced.

In 2014, Frederique Constant will introduce the new FC-945 Silicium Heart Beat Calibre, improved in terms of reliability, durability and pure technical excellence. For the past two years, the R&D Department at Frederique Constant has been designing, developing and improving the 126 components contained in the all-new Heart Beat Manufacture. Now, our company is delighted to introduce its implementation of the newest, most technologically superior materials available in the world today.

The escapement’s most critical function is to keep the balance spring winding and unwinding. Since watches were first invented, the requirements assigned to the escapement have involved high levels of friction. The teeth of the escapement wheel are driven by the mainspring’s power source. They slide against the teeth of the ratchet a nano-second before they lock together. This is the friction, which kicks the anchor. It is also the friction that means lubrication will be necessary.

The ticking sound of a Frederique Constant watch is created when the balance spring gear and the escapement teeth lock together. In virtually all-modern escapements, the ratchet’s teeth are extremely hard and highly polished stone. Despite these levels of strength and polished smoothness, lubrication is still required.

Until now, lubrication has been required to protect escapements from the damaging effects of friction. As the lubrication used in the escapement ages, thins or dries out, the level of friction increases, and less power is transferred to the all-important balance wheel.

Unless an escapement is properly lubricated, it can become damaged to the point where metal parts will have to be replaced. Modern watches are typically more reliable than their predecessors due to the higher quality oils used to lubricate the escapement. To maintain mechanical watches in optimum working condition, they normally require cleaning and lubricating every four years.

Silicium is the chemical element represented in the periodic table by the symbol Si; its atomic number is 14. A tetravalent metalloid, Silicium is less reactive than its chemical analogue, carbon. Silicium does not freely occur in nature but mainly occurs in minerals consisting of virtually pure Silicium dioxide in different crystalline forms, including quartz, chalcedony and opal. It is also found in silicates (various minerals containing Silicium, oxygen and one other metal), such as feldspar. Silicium is the principal component of most semi-conductor devices and takes the form of silica and silicates in glass, cement and ceramics. Silicium is widely used in semi-conductors, because it remains a semi-conductor at higher temperatures than does the semi-conductor Germanium. In addition, Silicium’s native oxide is easily grown in a furnace and forms a better semi-conductor/dielectric interface than virtually all other material combinations. In its crystalline form, Silicium is dark gray in colour and has a metallic lustre. It is similar to glass in that it is quite strong. Pure Silicium has a negative temperature coefficient of resistance, because the number of free charge carriers increases with temperature.

The crafting of a Silicium escapement wheel requires the use of a new technology called Deep Reactive Ion Etching (DRIE).  A multiple image of the escapement is produced and projected onto a round Silicium wafer measuring 100 mm in diameter by just 0.5 mm in thickness. Typically, wafers are made in various sizes ranging from 1 inch (25.4 mm) to 11.8 inches (300 mm), and generally to a thickness of 0.5 mm. The wafers are cut from a boule of semi-conductor using a diamond saw or diamond wire; they are then polished on one or both faces. Using a single 100 mm wafer, it is possible to produce up to 250 escapement wheels.

The wafer itself is composed of three different substrates, or layers of Silicium. The central substrate functions as the separation layer. After the image of the escapement wheel has been projected on the wafer, the exposed lacquered substrate is cleaned away, leaving the non-exposed parts of the wafer. Then, the non-exposed lacquered substrate is etched with plasma, down to the separation layer. The Silicium escapement is then released via isotropic etching. The pieces produced by this operation only have to be cleaned on the surface. Each wheel is completely identical and requires absolutely no balancing, centring or polishing. Such wafers are the keys to the fabrication of the Frédérique Constant Silicium escapement.

Benefits of the Silicium Escapement

Benefits: Age-related thinning and drying of lubrication will no longer occur. An escapement wheel that doesn’t require oiling avoids the risk of excess oil spreading to other parts of the movement.

Benefits: The escapement wheel is accelerated and stopped at each tick and tock of the watch. The low-weight Silicium escapement wheel has lower inertia, thereby increasing energy efficiency.

The Heart Beat Manufacture features a Silicium escapement that uses less power and maintains amplitude more efficiently than a standard lever escapement, because it functions without lubrication.

Silicium escapement wheel can clearly be seen through the Heart Beat aperture in the dial, working tirelessly and at the same time creating an eye-catching effect. The new Heart Beat Manufacture Silicium Calibre is housed in a stainless steel case, measuring 42 mm in diameter. The popular sapphire crystal see-through case back is another feature certain to please. This first Frédérique Constant Heart Beat Manufacture model with Silicium escapement wheel and specially designed dial will only be offered in 18K gold (which is in a limited edition of 888 pieces) and in stainless steel.