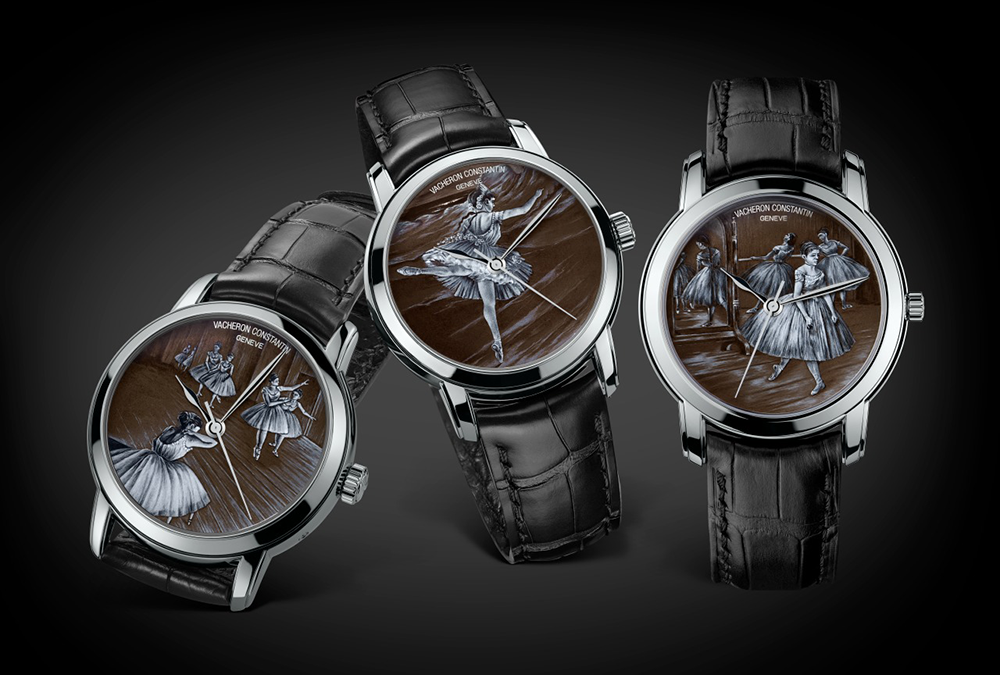 In a last wave of Métiers d’Art Hommage à l’Art de la Danse releases, Vacheron Constantin unveils the three final additions to its collection, based on the highlights of a ballerina’s daily life: learning, training and performance. These creations from the workshops of the Manufacture revisit the ancestral art of Grand Feu grisaille enamelling to highlight the art of classical ballet by reinterpreting the works of Edgar Degas. This collection is exclusively presented at the inauguration of the Singapore ION Orchard boutique.

In becoming a patron of the Opéra National de Paris in 2007, Vacheron Constantin chose to provide a uniquely inspirational stage for the artisanal traditions of the Fine Watchmaking artistic crafts known in French as Métiers d’Art. This partnership uniting time, art and culture celebrates the values on which the brand has been built since its founding in 1755: supporting creativity, openness to the world, sharing a passion, passing on knowledge and the quest for excellence.

Ballet and opera are both worlds in which the choreography of a work is always transcended by the talents and sensibilities of all those involved. In horology as in ballet, the art of combining precision, renewal and wonderment is based on perfect technical and aesthetic mastery. But above and beyond knowledge, each accomplishment is driven by a human story brimming with encounters and with faithfully perpetuated and shared skills. Metiers d’Art Hommage à l’Art de la Danse, capturing the movement and the choreography of time These three new Métiers d’Art Hommage à l’Art de la Danse watches crystallise the magic and the subtly alchemy between complementary arts: that of the ballerina, that of the enameller, and that of the watchmaker.

Within a white gold frame, Degas’ beloved ballerinas glide gracefully beneath the everdancing hands. The master enamel artist drew inspiration from three more paintings by the master and represent three new highlights in the life of a ballerina: learning with The Dance Class, dated 1871 and on show in the Metropolitan Museum of Art (New York, USA); training with Ballet Rehearsal on Stage, dated 1888 and exhibited at the Musée d’Orsay (Paris, France); and performance with Dancer on Pointe, painted in 1877 and belonging to the private collection of Diane B. Wilsey.

The finesse of Grand Feu grisaille enamel painting reveals the slightest details of the protagonists: the tiniest fold of the tutus, the smooth velvet of the ribbons encircling their neck, the transparency of tulle and muslin… Entirely in the manner of Degas, the Vacheron Constantin master enamel artist reinterprets the exact moment, the gestures, the pose and the perspective, playing on chiaroscuro light and shade effects to anchor the scene firmly in reality.

Whereas grisaille enamelling is generally applied to black enamel, the House artisan decided to work with a translucent brown enamel base serving to accentuate the depth effect while lending a soft nuance to the painting. After applying this base, the enameller adds touches of Limoges white enamel that is then drawn out using needles, extremely fine brushes and even cactus thorns so as to create graded shades and play on the various pigments.

Limoges white enamel is a now rare and extremely rare powder mixed with oils. The challenge lies in the material itself that is extremely difficult to work with and requires the artisan to display almost intuitive sensitivity. Each of the layers requires a firing operation that must be timed to the nearest second. With each Grand Feu firing, the enamels change, become more intense and retract. The enameller’s experience plays an essential role in this process. The firing times are calculated according to the type and quantity of the material applied and their exact duration is one of the trade secrets of the artist who must juggle with a broad range of grey shades. The latter are perfectly suited to the art of portrait painting, as is confirmed by the extreme finesse shown in depicting facial expressions.

Framed to perfection by the understated elegance of a finely polished 40 mm-diameter case, the Grand Feu grisaille enamelling of the Métiers d’Art Hommage à l’Art de la Danse is entirely hand-crafted with infinite patience, meticulous care and intense concentration. A worthy heir to the spirit of the Cabinotiers cherished by the founders of the House, this ancestral technique reclaimed by Vacheron Constantin succeeds – without the help of vivid colours nor additional material – in creating an authentic depth effect that captures the ballerinas’ experience right the way through to the tiniest fold in their costume. The music to which they move is the regular beat of the self-winding Calibre 2460, entirely developed and crafted in the Manufacture Vacheron Constantin. Such a work of art naturally deserved an exceptional movement, and its superlative finishes are performed in keeping with the finest Genevan traditions of Fine Watchmaking. The Métiers d’Art Hommage à l’Art de la Danse watches bear the prestigious Poinçon de Genève (Hallmark of Geneva), the ultimate token of Haute Horlogerie testifying to the quality, craftsmanship and reliability of an exceptional timepiece produced in Genevan territory.